The UK has the fourth largest golden eagle (Aquila chrysaetos) population in Europe (approx. 430 pairs), almost all in Scotland. Demographic monitoring of this population, primarily involving productivity and distribution of occupied and vacant territories, has been achieved by censuses every 10 years and by more spatially limited but more temporally expansive annual surveys of approx. 200 occupied territories undertaken by the Scottish Raptor Study Groups (SRSG). Whilst these surveys are important for understanding the demographics of the UK golden eagle population, they are limited because individual golden eagles cannot be confidently recognised and information on annual turnover in the breeding population is lacking. 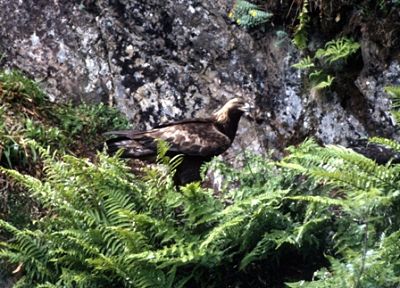 The most up-to-date research (Whitfield et al. 2008. A Conservation Framework for Golden Eagles: Implications for their Conservation and Management in Scotland. Whitfield et al SNH Report No. 193.pdf) indicates that the Scottish population does not enjoy an overall favourable conservation status and may be close to decline. This is despite the apparent stability inferred by simple temporal comparisons of numbers of occupied territories.

Currently, adult survival estimates are only possible using imperfect methods from classic population dynamics theory and observations of age structure of the population. This undermines our ability to monitor the population effectively. To overcome this research gap, we are using non-invasive genetic sampling to monitor the presence of individual eagles over time. With the support of the SRSG, we are collecting DNA samples from adult and nestling golden eagles. These samples will  allow us to identify individual eagles to address the following research objectives:

Since the project started in 2006, over 200 unique sites have been sampled, and for many of them ‘repeat’ samples have been made over the three-year period. These indicated a minimum annual survival rate of 94.7% (n = 38), probably the first time that a survival rate has been estimated for this species using DNA-identification. These preliminary analyses suggested also that 'intruders' may be present occasionally very close to the nest site of resident pairs, especially where breeding eagle density is high in parts of the Western Isles.

Despite the occasional (and interesting) presence of such intruders, it is apparent that DNA identification offers excellent potential as a means of monitoring turnover and survival of resident pairs of golden eagles.

This study compliments our research on golden eagle dispersal. Click here to link to our page on satellite tracking golden eagles in Scotland.

Lab work is undertaken in collaboration with researchers at the Royal Zoological Society of Scotland's Zoological Genetics Unit and is funded by Natural Research Ltd. We would like to thank David McLeod for his help with GIS analysis.

To date, this study has received generous financial support from the Helen and Geoffrey de Freitas Charitable Trust and from the National Birds of Prey Trust. In addition, the study benefits (and is indeed reliant) on the support of voluntary SRSG members who help to collect our samples.