We are delighted that another paper, ‘Age and sex-selective predation moderate the overall impact of predators’ produced from a PhD supported by NR has won the Watson prize. Sarah Hoy’s paper was praised for being an outstanding paper on predation.

NR also supported the paper by Fabrizio Sergio ‘No effect of satellite tagging on survival, recruitment, longevity, productivity and social dominance of a raptor, and the provisioning and condition of its offspring’ which was highly commended.

The press release from British Ecological Society can be found here:  http://www.britishecologicalsociety.org/clean-sweep-bes-journals-watson-raptor-science-prize/

Two outstanding research papers on raptors have been recognized for their excellent science and awarded a prestigious European honour.

The paper winning the Watson Raptor Science Prize 2013 is by Professor Miguel Ferrer and colleagues based at the High Council for Scientific Research of Spain, Delegación del CSIC en Andalucía – Casa de la Ciencia, Spain.   Entitled  ‘Weak relationship between risk assessment studies and recorded mortality in wind farms’, and published in  Journal of Applied Ecology,  it reported on studies at 54 proposed and 20 constructed wind farm sites.  In addition to finding some of the highest ever recorded bird collision rates, the paper made key recommendations for improving the siting of wind turbines and the research needed to assess bird collisions.

Dr Miguel Ferrer commented: “We are delighted with this prize.  It is great to have this support for our research in applied ecology, which confirms our view that raptors are excellent to work on.  Personally, this prize in the name of the Watson family is truly special.”

This annual prize has been established to recognize the most outstanding, peer reviewed scientific publication on raptor ecology, based on research undertaken in Europe.  Established in the names of the late Donald and Jeff Watson, this award forms part of a unique initiative to establish the Watson Bird Centre, and St John’s Town of Dalry in Galloway, SW Scotland, as a bird town.

On reviewing a large number of publications in 2012 the selection panel, comprising Professors Des Thompson (Chair), Ian Newton FRS and Steve Redpath, was unanimous in selecting this paper.

In addition, the panel specially commended an outstanding paper by Richard Evans (RSPB), Phil Whitfield (Natural Research) and Lorcán O’Toole (Irish Golden Eagle Trust), entitled  ‘The history of eagles in Britain and Ireland: an ecological review of place-name and documentary evidence from the last 1500 years’ and published in Bird Study.  It ingeniously reconstructed the distribution and numbers of eagles in Britain and Ireland on the basis of historical place names.

Speaking on behalf of his team, Richard Evans remarked: “I am thrilled that our eagle history paper has captured the imagination of the Watson Raptor Science Prize panel, and has been rated so highly in comparison with so much other high quality bird of prey research published in 2012.  Writing the paper opened some fascinating windows into the past, as well as potential future prospects for both of Britain and Ireland’s native eagle species, and it is a privilege for our work to have been recognised in this way.”

Commenting on the selection, Professor Des Thompson stated “Some excellent research on raptors is being carried out in Europe, and it was a special treat for our panel to read so many high quality papers.  We offer our congratulations to Miguel Ferrer and his colleagues for painstaking field research, and to Richard Evans, Phil Whitfield and Lorcán O’Toole for a fascinating piece of scientific detective work.”

Director of the Watson Bird Festival, Professor Roger Crofts, commented: “Watson Birds is all about celebrating excellence, and the Watson Raptor Science Prize is a unique contribution.  I thank the panel for their meticulous work. And I warmly congratulate the authors of both papers

3. The Watson Raptor Science Prize is in its third year.  This annual prize, established in the name of the late Donald and Jeff Watson, was set up to recognise the most outstanding, peer-reviewed scientific publication on raptor ecology, based on research undertaken in Europe.  The 2012 Prize was awarded to Dr Fabrizio Sergio for his paper: ‘Raptor nest decorations are a reliable threat against conspecifics’. Science (2011), 331: 327-330.  A paper by Dr Arjun Amar and colleagues at the RSPB on Orkney’s hen harriers was specially commended: http://onlinelibrary.wiley.com/doi/10.1111/j.1365-2664.2010.01896.x/abstract.  The 2011 Prize was awarded to Dr Jen Smart and colleagues at the RSPB for their research paper on persecution of red kites in the  Scottish Highlands: http://www.rspb.org.uk/Images/smart_amar_sim_et_al_2010_tcm9-248263.pdf 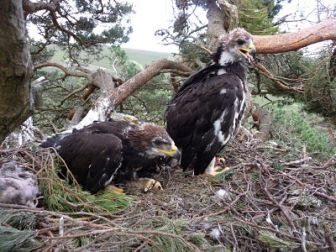 In 2010 there was a number of other satellite tracking projects within Natural Research including 2 Steller's sea eagle tags fitted in Russia, 3 white-tailed eagles on the west coast of Scotland and more golden eagle tags were fitted throughout Scotland. Also, we continue to track a pallid harrier that is nesting in central Asia.

A blog has been set up so you can track three golden eagles as they disperse. Click here to visit the blog http://goldeneagletracking.blogspot.com